Home / What is Asthma

Have you, or someone you know, been diagnosed with asthma? If so, you probably have lots of questions.

You may wonder, for example, just what asthma is. The medical definition of asthma is simple, but the condition itself is quite complex.

Doctors define asthma as a “chronic inflammatory disease of the airway” that causes the following symptoms:

Asthma has no set pattern. Its symptoms:

The cause of asthma is not known, and currently there is no cure. However, there are many things you can do so you can live symptom-free.

In someone with normal lung function, air is inhaled through the nose and mouth. It passes through the trachea (also called the windpipe) before moving into the bronchi (large airways), which are branching tubes leading away from the trachea. The bronchi branch into smaller and smaller tubes, ending in many small sacs called alveoli. It’s in the alveoli that oxygen, which the body needs, is passed to the blood, while carbon dioxide, which the body doesn’t, is removed from it. 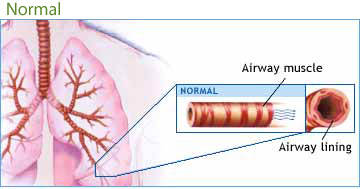 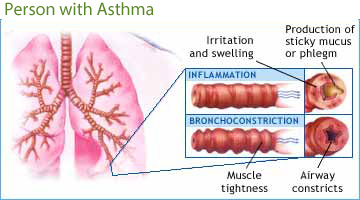 People with asthma often have trouble breathing when they’re in the presence of what are called “triggers“. When someone with asthma has asthma symptoms, it means that the flow of air is obstructed as it passes in and out of the lungs. This happens because of one or both of the following:

Both of these factors cause the airways to narrow, making it difficult for air to pass in and out of them.

The airways of someone with asthma are inflamed, to some degree, all the time. The more inflamed the airway the more sensitive the airway becomes. This leads to an increase in breathing difficulty.

Asthma Can Affect Anyone

Asthma is a chronic condition, meaning it needs to be monitored and controlled over a lifetime.

Anyone can get asthma, although it’s usually first diagnosed in young people. Currently, more than 3.8 million Canadians have asthma.

Most people with asthma can live full, active lives. The trick is learning how to keep the asthma symptom-free. If you have asthma, you can control it: