Allergies occur when the immune system becomes sensitive and reacts to substances in the environment called allergens causing an allergic reaction. An allergic reaction occurs when the allergens come in contact with cells called “mast cells” which are found in the lining of the nose, lungs, skin and intestinal tract. To protect your body the immune system produces antibodies called immunoglobulin E (IgE), that are attached to the mast cells causing the release of many chemicals, including histamine into the bloodstream. Histamine acts on the eyes, nose, throat, lungs, skin or the intestinal tract resulting in inflammation and symptoms of an allergic reaction. Future exposure to the allergen will trigger the same antibody response and thus an allergic reaction.

Mast cells release histamine when an allergen is encountered. The histamine response can produce sneezing, itching, hives and watery eyes.

Allergies is a multi-factorial disease with both hereditary (inherited) and environmental factors. However, having a parent or sibling with an allergy, doesn’t mean you’ll have it too. But you might inherit the tendency to develop an allergy. In other words, if one or both of your parents and/or siblings have allergies, it’s more likely you will too.

Allergic rhinitis, or hay fever, is a collection of symptoms, predominantly in the nose and eyes, to allergens such as dust, animal dander and pollen.

Having allergies can have a big impact on your daily activities. You may be constantly fatigued, irritable, or just not feeling well. People with allergies often have difficulty concentrating, which can affect performance and even lead to absence from work or school. Allergic rhinitis or “hay fever” is one of the most common types of allergy, causing an inflammation of the tissues in the nose, often accompanied by conjunctivitis (red, itchy, and/or watery eyes).

These symptoms can be triggered by a reaction to pollen from grasses, trees and some other plants, or spores released at certain times of the year. Allergies can be seasonal or year-around. Most cases of allergies are seasonal, but some people experience symptoms year-round. Other allergies may be triggered by a variety of allergens such as house dust mites, pet dander or air pollution.

Mold: this allergy is usually worse during humid and rainy weather. Mold can be found in poorly ventilated bathrooms, basements, under the kitchen sink, wherever water might collect and stand.

Animal dander: are made up of dead skin and hair from a pet, which is floating in the air and is the main source of pet allergies. You can be exposed to dander when handling an animal or from house dust that contains pet dander.

Dust: contains dust mites (tiny bugs that live in your home). Dust mites feed off of pet and human dander (dead skin cells) or on surfaces in homes where there waste (feces) is present. Dust mites are a major cause of allergies and asthma. Dust mites can be found in humid areas filled with dust, such as bedding, pillows, mattresses, carpets, furniture and stuffed toys.

An allergy skin test is the most effective method to confirm underlying allergies. With skin testing, specific allergens can be identified through a skin prick test by using small amount of the suspected allergen causing the allergy by scraping the skin – forearm, upper arm or back – with these allergens. The skin is then watched for any signs of reaction, usually swelling and redness of the site. Several allergens can be tested at the same time. 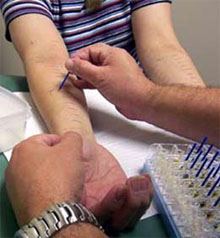 Allergic Conjunctivitis: Inflammation of the tissue lining the eyelids (conjunctiva) due to a reaction from allergy-causing substances such as pollen and dander. When your eyes are exposed to anything to which you are allergic, histamine is released and the blood vessels in the conjunctiva become swollen (the conjunctiva is the clear membrane that covers the “white” of the eye). Reddening of the eyes develops quickly and is accompanied by itching and tearing. When an allergen causes the irritation, the condition is called allergic conjunctivitis.

Sinusitis: Inflammation of the air cavities within the passages of the nose (paranasal sinuses) is referred to as sinusitis. Sinusitis can be caused by infection, but can also be caused by allergy and irritation of the sinuses. Sinusitis commonly occurs when environmental pollens irritate the nasal passages, such as with hay fever. The symptoms of sinusitis include: pain, congestion and/or a frontal headache.